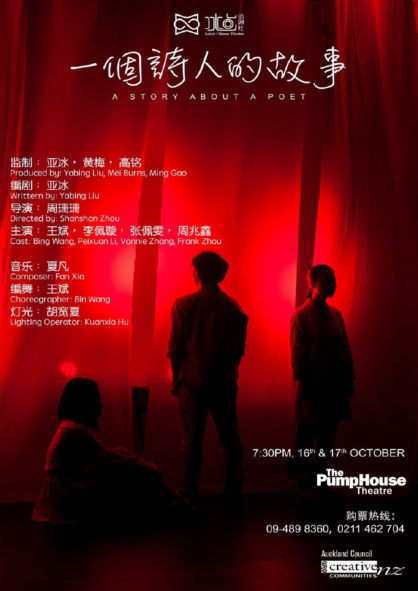 Get a great ‘both shows’ season discount when you book for Dial M for Murder and A Story About A Poet at the same time.
Book a Season Pass

A Story about A Poet is the third originally-written stage play by Milford play-wright/producer Yabing Liu of I-start Chinese Theatre. This heart-touching play was a hit with the audience when it was showcased at The PumpHouse’s 40th Anniversary celebrations in May 2017. Although performed in Mandarin, the mainly English-speaking audience was entranced by the actors’ moving and poignant performance proving that language is often no barrier to the enjoyment of art and the telling of a story.

A Story About A Poet, which is inspired by the life of the Chinese/New Zealand poet Gu Cheng, is reportedly I-start Theatre’s ‘audience favourite’ to date.
Hence at the request of many who missed it, A Story About a Poet returns to the PumpHouse stage.
Gu Cheng was a famous Chinese poet who lived and eventually died on Waiheke Is-land. The poet became depressed and restless after his lover left him. However his wife encouraged and supported him to write a novel, based on the love story about him and the other woman. This touching story shows how the process of writing the novel witnesses the complex and unusual emotional journey about love and death.

I-start Chinese Theatre was established in 2014. Since then, three original plays have been produced, all receiving very good reviews from audiences, Chinese Media and local media.
I-start Theatre’s first play, Nice to Meet You, was a great success when staged at The PumpHouse, and was even reported on by CCTV in Beijing. The second play, 56 Chang De Road, was also a hit in the local Chinese community.

I-start Theatre aims to give Chinese amateur theatre performers a stage on which to show their talents, and at the same time provide original stories inspired by real life, to entertain and inspire audiences of all cultures.

I-start Chinese Theatre is the first Chinese theatre in New Zealand, now it is its fifth anniversary. Since 2014, they have produced five original plays.  All of them received excellent reviews from the audiences, Chinese Media and Local Media. I-start Theatre aims to give Chinese amateur theatre performers a stage on which to show their talents, to realise their dreams, and at the same time provide original stories inspired by real-life, to entertain and inspire our audiences.