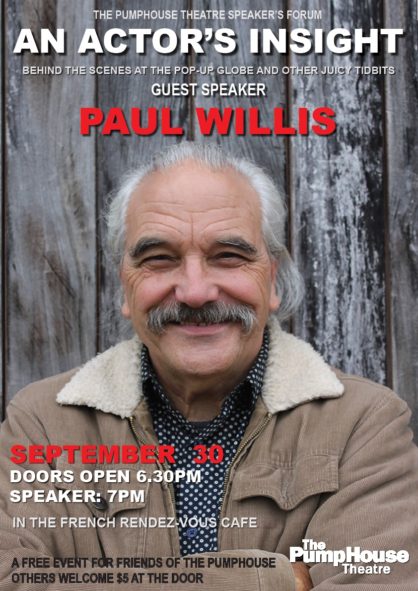 A seasoned Shakespearean actor, Paul A. Willis most recently appeared in the Company of the Pop Up Globe Theatre, starring as Sir Andrew Aguecheek in Twelfth Night. At this Forum event Paul will talk about his time at the Pop Up Globe offering fascinating behind-the-scenes insights into what made this event the summer sensation of 2016.

Hailing from America, Paul was first an apprentice, then later worked and taught, at the Company of the American Conservatory Theatre in San Francisco. He subsequently performed with a number of Repertory Theatre Companies in the U.S. before moving here some twenty years ago. For many years Paul worked at Birkenhead College as HOD Drama, and he has worked in theatre, film and television in New Zealand.

As well as being an experienced stage and screen actor, and a highly-regarded teacher, Paul has worked as a professional clown, mime, storyteller, puppeteer, animator, quick sketch artist and illustrator. In October he will be joining us at The PumpHouse Theatre as the tutor of our eight-week ‘Acting Coaching for Adults’ course. Is there no end to this man’s talents?!