An Unseasonable Fall of Snow - The PumpHouse Theatre 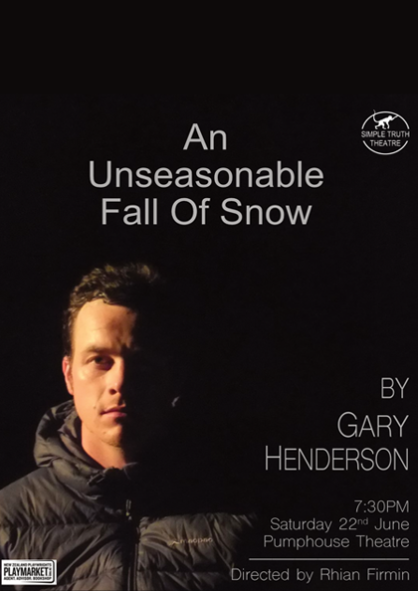 Written by Gary Henderson in 1998 An Unseasonable Fall of Snow is a raw, real and confronting investigation into toxic masculinity and how isolation and disconnection can have severe effects on a person’s mental health which can lead to the direst of consequences. The play was originally commissioned by the NZ International Festival of the Arts and has risen to fame, being performed in many theatres NZ and worldwide, consequently landing it, and Gary Henderson a spot in the NZ theatre hall of fame. As quoted by Playmarket (2007), An Unseasonable Fall of Snow portrays:

“A BEWILDERED YOUNG MAN IS QUESTIONED BY A RUTHLESS INTERROGATOR, WHO CIRCLES LIKE A PREDATOR, FORCING HIM CLOSER AND CLOSER TO AN AWFUL ADMISSION. A COMPELLING INVESTIGATION OF TRUTH, CONSEQUENCES, AND THE ULTIMATE VALUE OF HUMAN LIFE.”

Simple Truth brings this show to you as part of their national highschool tour. Over 7 weeks the show gets performed 30 times – each time in a new location. As a result the actors develop a special bond with the script and the characters which creates an energy on stage that is not to be missed.