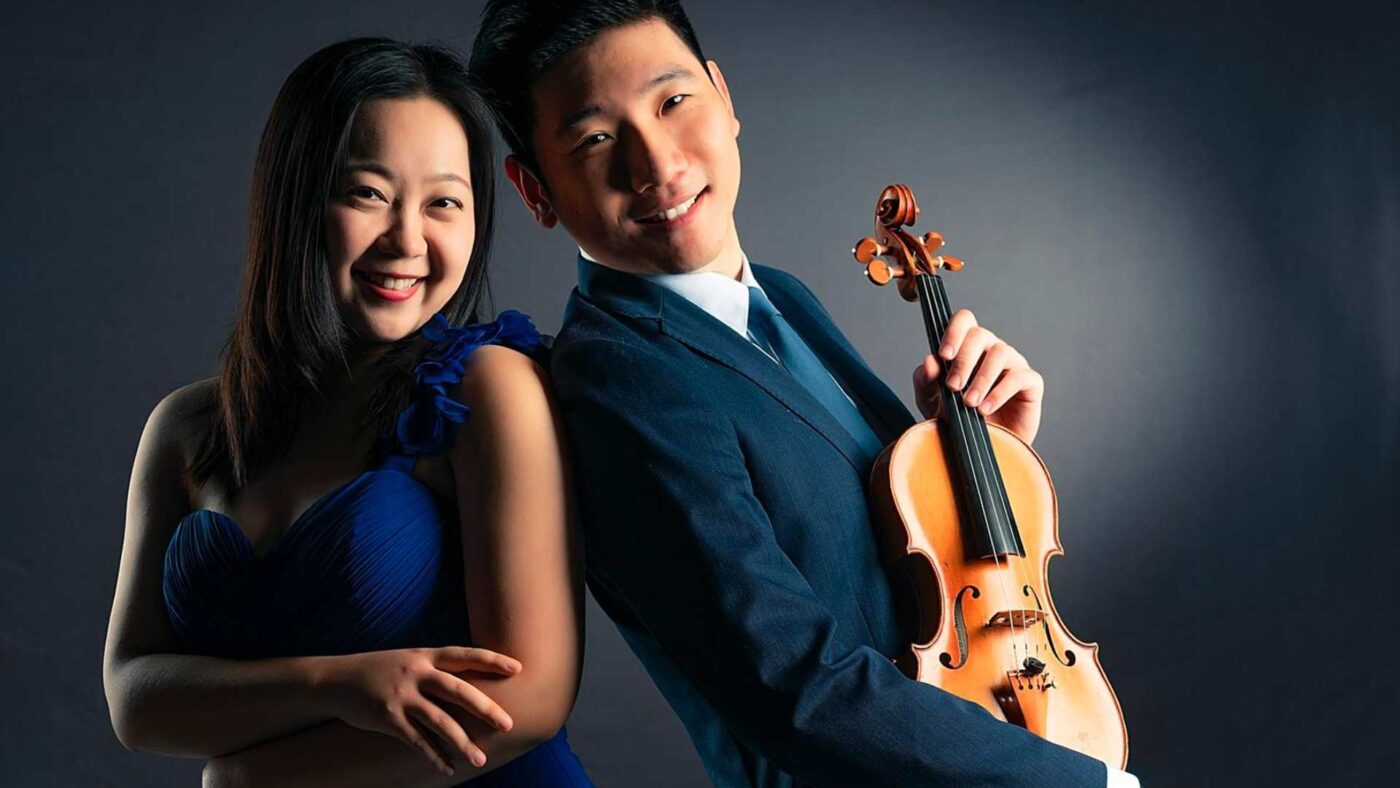 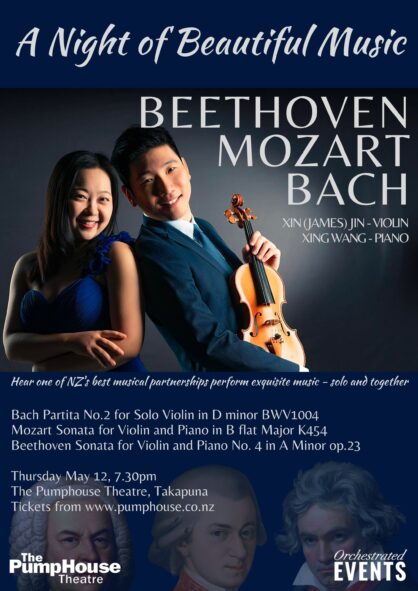 Hear one of NZ’s best musical partnerships perform exquisite music – solo and together.

Xin (James) Jin – Violin
Currently working as Associate Principal Second Violinist in the Auckland Philharmonia Orchestra, China Liaisons Coordinator in APO, Director of Auckland Academy of Music, Director of NZ Chamber Orchestra, Director of Asia Pacific Performing Arts, Board Member of the Asia Pacific Musicians Association, and Board Member of the New Zealand Huaxing Arts Group, Xin (James) Jin was born in China and came to New Zealand with his family in 2001.

In New Zealand James performed regularly in recitals and concerts, highlights of his performances include Brahms’ violin concerto with the Wellington Chamber Orchestra and the Manawatu Sinfonia Orchestra and concert pieces with the Michael Monaghan Young Musicians Foundation Orchestra. James was contracted by the Wellington Vector Orchestra as Principal Second Violinist in 2007, and in the following year, he was admitted, with the award of full scholarship, to the San Francisco Conservatory of Music.

In America, James has won top prizes in competitions including the Mu Phi Epsilon International Music Competition and the Y.E.S. Foundation Young Arts’ Competition. James has also worked with many distinguished teachers, artists, ensembles, and conductors in the Tanglewood Music Festival, Music Academy of the West, and the Siena International Music Festival. Returning to New Zealand in 2014, James has won the New Zealand School of Music
concerto competition and the Waikanae Music Society scholarship. James joined the APO as Associate Principle 2nd Violinist in 2013.

Apart from performing with the orchestra, James also curates the APO’s chamber music series Up-Close, and the APO Summer Piano and Chamber Programmes. Besides working for the APO, James appears regularly in recitals and concerts throughout the country. His chamber ensemble, the Auckland Piano Trio, is featured in the CMNZ Encompass Regional Tour concert series. James will appear as a soloist with Orchestra Auckland in August, playing the Beethoven Violin Concerto.

Xing Wang – Piano
Ms. Wang is one of New Zealand’s most sought-after pianists. As a soloist, Xing has collaborated with the Auckland Philharmonia Orchestra, Auckland Symphony Orchestra, NZSM Orchestra, Manawatu Sinfonia, and Tawa Symphony Orchestra. She has given solo recitals around the globe, including in China, the USA, Spain, Italy, and New Zealand.  Her performances have always been very well received, many of them broadcast by Radio New Zealand.

During her study in the United States, Xing served as music director in the San Francisco Grace United Methodist Church and as accompanist and coach of the Ina Charles Opera Ensemble and the Capital Opera Company. Xing has recently appeared as a soloist with Orchestra Auckland playing the Second Piano Concerto of Beethoven.