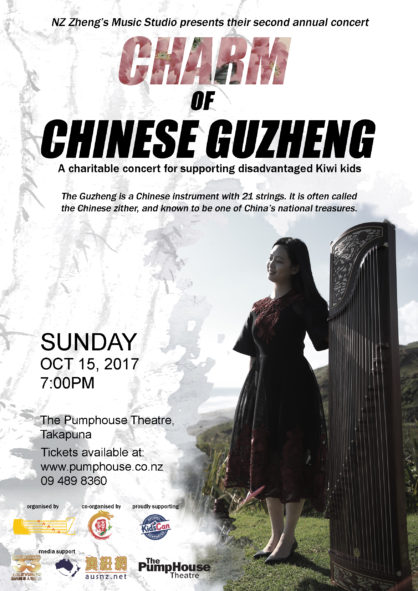 Guzheng, also known as the Chinese zither, is a unique music instrument which originated in China over 2500 years ago.

Lin Zheng, founder of Zheng’s Music Studio, along with her students, held their inaugural concert (Rhythm of Chinese Guzheng) at The PumpHouse Theatre in Takapuna last year. Following on from their highly successful performance, this year in October, they will host their second annual concert entitled Charm of Guzheng to New Zealand audiences.
This year’s performance will consist of a variety of genres, from traditional Chinese Guzheng music to modern day pop. Several of these songs have been adapted by Lin Zheng herself, which will be premiered in this year’s show.

This studio is dedicated in providing education in the art of Guzheng Music through performance and experience. Zheng’s Music Studio aims to promote traditional Chinese culture and art and encourage art communications between Western and Chinese cultures. The Studio devotes itself to culture interests and love of music, spark musical inspiration and enrich lives with art.

Since establishing, the Studio has had the opportunity to perform at many different events, such as the Auckland Mid-Autumn Festival Gala Concert and the New Stars Dreamworks Singing Competition 2016. The Studio was honoured to have been invited by the Ethnic Communities Minister of New Zealand to perform at the 2017 Chinese New Year celebration in the Beehive. The Studio was also invited for New Zealand Music Month events and held community showcase performances at St Helier’s Community Library, Devonport Library and Elizabeth Knox Home and Hospital.