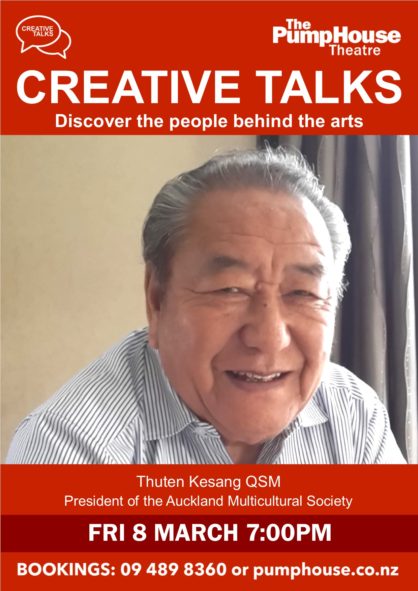 Half a century ago New Zealand welcomed its first Tibetan refugee, Thuten Kesang.

Thuten was born and raised in Tibet, but the Chinese occupation of Tibet left him as an orphan and a refugee in India. He emigrated to New Zealand in 1967.

His association with the Auckland Multicultural Society began in 1989 when he was asked by the then the president of AMS, to join them and represent the small Tibetan community that lives in Auckland. He became president of the society in 1993, a position he has held several times including currently.

The PumpHouse has been proud to host The Auckland Multicultural Society’s annual Festival for the last 22 years bringing together the arts of the diverse cultures who live in the region to perform in the same space.

In 2002 Thuten was awarded The Queen’s Service Medal as recognition of his work not only for Tibet (he is the Chairman of The Friends of Tibet NZ organisation) but also for the contribution he has made in promoting the multicultural society in New Zealand.