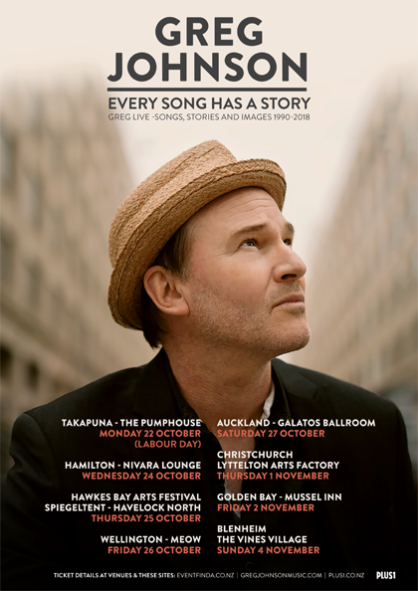 Every Song Has A Story sees Greg Johnson in concert for eight shows across New Zealand, presenting songs, tall stories and rediscovered photos and visuals.

Greg will strip back each song in intimate duo mode, with his special guest guitarist Ben King (Goldenhorse).

With a back catalogue of over 300 songs and three decades of touring, California-based Kiwi Greg Johnson has yarns to spin – from his touring adventures around New Zealand, onto the charts as a young singer-songwriter, and his relocation to Los Angeles to chase the big time.

Fans can look forward to Greg delving into his songbook from across his entire career, 1990-2018 – picking from gems like ‘Isabelle’, ‘Liberty’, ‘Save Yourself’, ‘Now The Sun is Out’ and ‘Don’t Wait Another Day’ and so many more. In essence, an unstoppable stream of songwriting classics, which have netted him New Zealand music, awards, eight Top-20 albums and the coveted Silver Scroll.

Says Greg: “Part of my show has always been a fair dose of tale telling, so I thought I’d pull a few songs from the back catalogue – including some I’ve never played live, plus a few better known ones – and give a little background on the writing, recording and the events surrounding them.

“I’ve also unearthed a few old snaps which for me nicely represent the songs. In October we’ll set out on the road and have a wee party”.