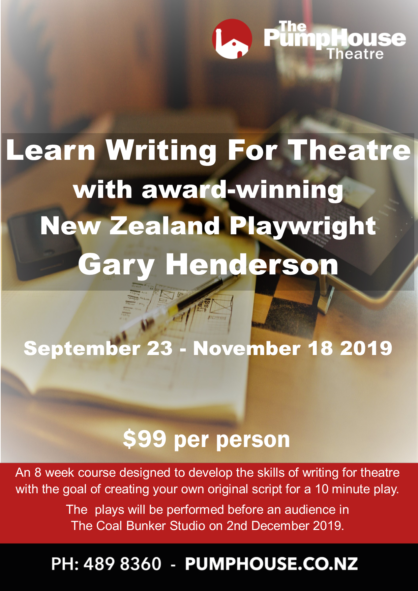 Join award-winning New Zealand playwright Gary Henderson at The PumpHouse Theatre for an eight-week course that will introduce you to the essential skills of writing for theatre.

You’ll emerge from this course with your own original script for a ten-minute play which will be performed before an audience on The PumpHouse Theatre stage in December 2019.

Gary Henderson is an award-winning NZ born writer and director. He has written for stage, screen, radio and as a collaborative librettist for opera.

His work has been professionally produced around New Zealand, in South Africa, Australia, Great Britain, Canada and the United States His most well-travelled play is Skin Tight which won a coveted Fringe First Award at the Edinburgh Fringe in 1998 during a sell-out season at the Traverse Theatre later transferring to New York in 2006, UK in 2007 and Canada in 2008.

In addition, he has also directed the work of other New Zealand playwrights both in theatre and for television.

From 2006 – 2012 Gary taught playwriting at Unitec’s School of Performing and Screen Arts in Auckland.

In 2013 he was the recipient of The Playmarket Award which recognises ‘a playwright who has made a significant artistic contribution to theatre in New Zealand.’
He has also served many times as a director and mentor in the development of scripts by new writers.