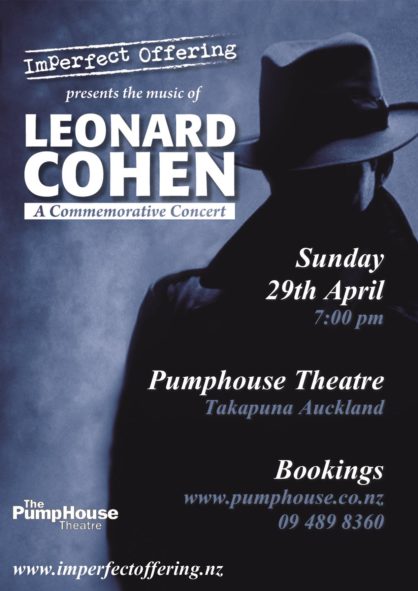 Imperfect Offering is delighted to present a concert of the music of Leonard Cohen. After sell-out performances in 2016 and 2017 in Auckland and Hamilton, Imperfect Offering bring their spellbinding line-up back to the PumpHouse Theatre again after their last acclaimed show here.

On the event of the death of Leonard Cohen in November 2016, the band featured on TVNZ News and their show at TAPAC Theatre sold out within hours. Drawn together by lead vocalist Peter McMillan, the nine-piece band includes violin and even balalaika with musicians from all musical backgrounds including jazz, rock and classical. Audiences have been warm in their praise:

“Fantastic night plus a full house and standing ovation. Congrats. It was brilliant”

“Great show. Seamless mix of decades and Peter introduces the songs effortlessly and helps us get a sense of Cohen and his music phases”

” A rich tapestry of music played by talented musicians”

“Been a fan since you began!!”

From their first concerts in 2015 through to sold out shows in 2016 and 2017, there has been huge interest in the music of Cohen. This year Imperfect Offering are touring the North Island including Ascension Wine Estate in Matakana, Century Theatre Napier and St Andrews in Wellington. Here at the Pumphouse Theatre, Cohen’s best loved songs will be lovingly recreated including “Suzanne”, “Bird on the Wire”, and his best known song “Hallelujah” as well as music from his astonishing last album, “You Want It Darker”.

ONLY ONE PERFORMANCE – LIMITED TICKETS – DON’T MISS IT!