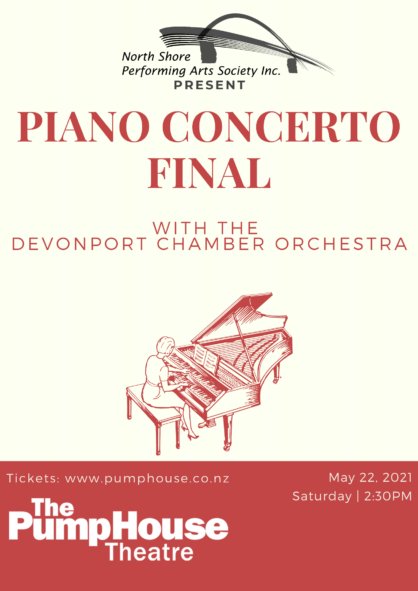 The North Shore Performing Arts Society is returning to the PumpHouse Stage for the 44th year with the Piano Concerto Final.

On Saturday 22nd May, 3 finalists aged between 12 and 17 will contest the final of our Piano Concerto Class, competing for a prize pool of $1000. These finalists will be accompanied by the Devonport Chamber Orchestra who will also provide us with a small musical programme.

This year will be the 67th Year that NSPAS have conducted their Annual competition for students of all genres of the Performing Arts. The number of people who compete varies but would average almost 2000 each year.

The preliminary round for this event will take place at 3:00 pm on Thursday 22nd April at The Brian Gerrard Theatre Birkenhead College.

A fortnight later the PumpHouse (Queen’s Birthday weekend) will reverberate with the sound of voices as young singers over the age of 18 take part in the NSPAS Senior Vocal Competition. The highlight of the weekend is the Becroft Aria which can have more than 20 plus entrants. The Becroft Aria final with 8 finalists competing for a prize pool in excess of $11,000 will take place on Monday evening (7 June) at. 4:30 pm.

In addition, during the weekend a Nomination class for the Vocal National Young Performer of the Year will take place. The final for this class will be held in Palmerston North on Labour weekend. Every winner of this title since 2008 has performed in the North Shore Performing Arts Competitions in the PumpHouse Theatre.