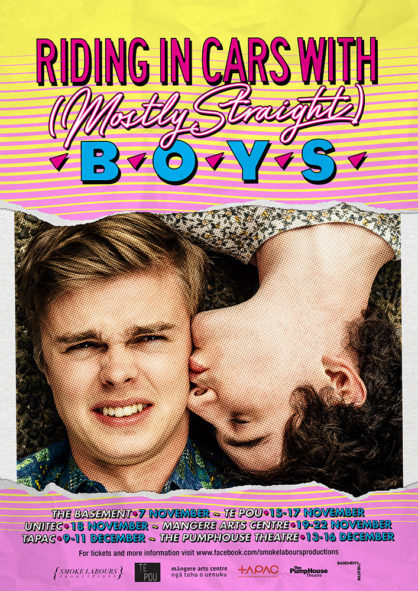 Kyle has crushes on straight guys. That’s his thing. But when one of his crushes confides in
him, he has to confront the lifestyle that he’s created for himself.

Riding in Cars with (Mostly Straight) Boys is an award-winning play by Sam Brooks, which
premiered at the New Zealand Fringe Festival in 2014 to rave reviews, has since been
published by Playmarket, and is performed entirely in a car!

Using a simple rig of speakers and microphones, Riding in Cars with (Mostly Straight) Boys
is performed to an audience who sit and stand around a car while the action unfolds in
front of them; it’s a unique, lo-fi and immersive theatrical experience like no other.

Starring Geordie Holibar (Shortland Street) and Tim Earl (The Curious Incident of the Dog
In The Night-Time).

Riding in Cars with (Mostly Straight) Boys is performed outdoors in The PumpHouse Theatre Courtyard. Some seating is available on the decking that surrounds the car.  The show contains some offensive language.