Something Old, Something New - The PumpHouse Theatre 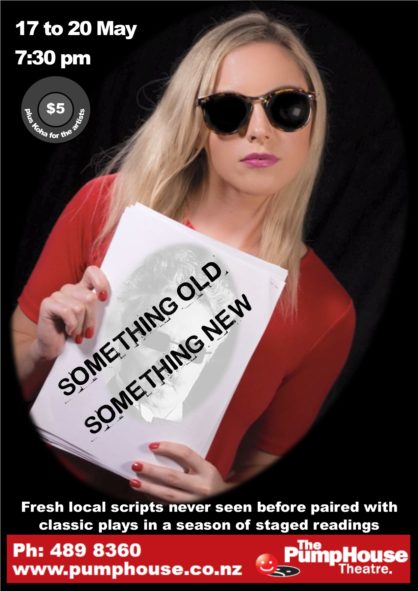 Wed, May 17 - 7:30pm
Nostalgia by Meg Andrews
The Proposal by Anton Chekhov

Thu, May 18 - 7:30pm
Debit and Credit by August Strindberg
Have a Nice Day by Ashley Milne

Fri, May 19 - 7:30pm
Mocked by Susan Battye
Ever Young by Alice Gerstenberg

Fresh local scripts never seen before are paired with old classics on the PumpHouse Theatre stage in the short season of staged play readings called ‘Something Old, Something New’, from 17-20 May.

Each evening will include two plays, one old, one new, and a forum after each where audience, actors and writers can give their feedback on what the play was like to act in and watch.

Tickets are just $5.00 available pre-show or at the door, with audience members requested to make a further donation or koha directly after the performance which will be shared amongst the performers.

Auckland-based playwrights include Meg Andrews, Susan Battye and Ashley Milne, while the roster of old talent includes the likes of Anton Chekhov and J.M. Barrie.

Also featuring in the season is new work by Claire Ahuriri-Dunning, winner of the 2005 season of Flip the Script playwriting competition, and curator of ‘Something Old, Something New’.