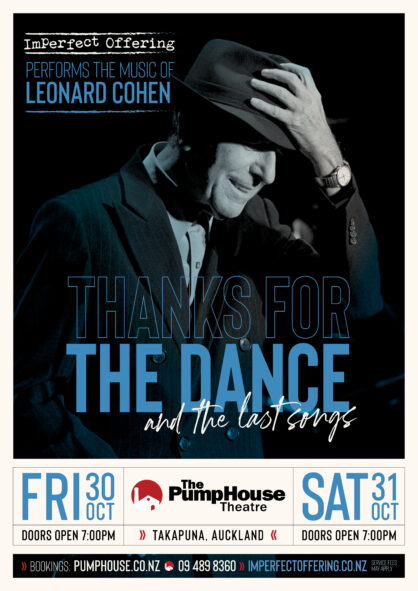 Book for Both Shows

Thanks for the Dance is a homage to Leonard Cohen with performances of songs from his final album released posthumously in 2019 by his son. In this programme of live music, acclaimed band Imperfect Offering will perform songs from Cohen’s last two albums including “You Want it Darker”, “Travelling Light”, “Thanks for the Dance”, “Listen to the Hummingbird” and “What Happens to the Heart” as well as a selection of favourite songs like “Hallelujah” and “Suzanne”.

Imperfect Offering has toured the North Island to critical acclaim and standing ovations from 2016 to 2019 with a full band of nine musicians including five vocalists and the beautiful violin of Nick Jones.

They return to the beautiful intimate spaces of The PumpHouse with two programmes of music over two nights with a selection of different songs in each night. Book for two nights for a discount and be immersed in the beauty and poetry of Leonard Cohen.

“Cohen’s music captured perfectly with the incredible talent of the whole band” – Radio 13, 2019