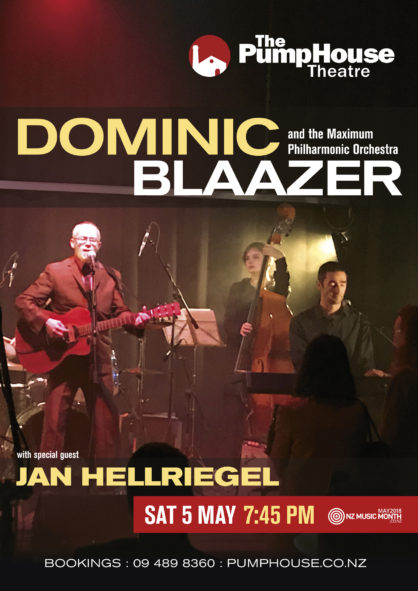 Following the launch of his critically-acclaimed album, “The Lights of Te Atatu,” Dominic Blaazer is pleased to bring his Maximum Philharmonic Orchestra to the PumpHouse Theatre.

A stalwart of NZ music, Blaazer has played alongside Don McGlashan, SJD and The Chills, also accompanying the Topp Twins, John Rowles, Goldenhorse, David Kilgour and The Clean, among many others.

Blaazer’s calling card is his songwriting with press comparing him to Jimmy Webb, Bacharach and Lennon. RNZ’s, Nick Bollinger said the songs were “beautifully refined … sound like classics, fearless and perfect,” while Graham Reid wrote, “he makes those lights seem magical and resonant … These are fine songs.”

They translate well on stage, too:
“Outstanding concert, Dom. The National were superb and yours was every bit as good.”
“Tight, melodic and poetic tunes with a great little orchestra working in sync.”

Our very special opening act is Jan Hellriegel, one of New Zealand’s most respected songwriters. For this evening Jan will be using the piano to showcase new songs from her forthcoming album as well as re-imagining some of her hits of yore.