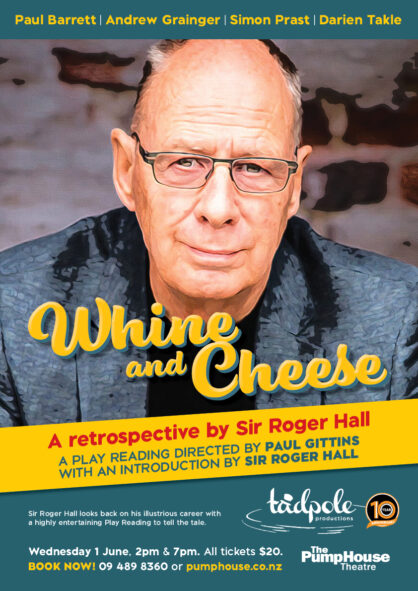 Tadpole Theatre Productions, in partnership with The PumpHouse Theatre, invites you to celebrate their 10th Anniversary with a special workshop reading of new work by their Patron, Sir Roger Hall

Born in England in 1939, Roger Hall emigrated to New Zealand in 1957, before beginning his television writing in the 1960s. He is recognised internationally for his long career and his role in the development of New Zealand drama. His prolific work includes writing a stage play or musical almost every year and the formation of NZ Writers Week. A Governor of the Arts Foundation, a Burns Fellow a Katherine Mansfield Fellow, and a member of numerous arts Boards, Sir Roger has won awards in every theatre field. He has also written over twenty books for children, as well as his autobiography, Bums On Seats, written in 1998.

Whine & Cheese is a retrospective of his lifetime in the theatre world.

A Decade Of Tadpole

In 2012 a new theatre group was formed, aiming to bring quality productions to the northern region of Auckland. Our first production – The Lion In Winter – was staged at the PumpHouse Theatre from May 31 to June 9, 2012.

Since then Tadpole has become a permanent fixture at The PumpHouse, staging two productions a year – except during pandemic lockdowns… The Tadpoles are at home by Lake Pupuke!